Swellnet has grown from a small one-man operation sending out surf forecast faxes to Adelaide surf shops in 1999, to one of the largest surf webcam / report / forecast websites in the world. In 2002 Swellnet’s phase one expansion offered surf forecasts covering the whole of Australia, through the first version of its website. The phase 2 expansion in 2005 included a major overhaul of the website to include surf forecasts and reports covering over 150 locations around the country, and also to make way for a national network of beach webcams.  The company took on a dozen reporters and two new forecasters, filing updates from 4 timezones. The need for a detailed and complex backend management system was flagged early on in the redevelopment process. 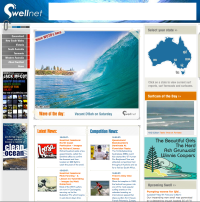 Smartsite partnered with Elk Creative, who were charged with visual direction and branding of the new site, as well as UI design and implementation. Elk Creative also developed  all the Flash charting and data elements. Smartsite scoped and developed everything else

Early consultation with Swellnet led to the creation of a  feature “wishlist”, which was then refined to a list of essentials. This formed the basis of the first draft scope document. Every piece of data to be presented on the site, and to be collected by reporters and forecasters, was then categorized and hammered into a fuzzy model. This model formed the basis for the first report / forecast database schema. There would eventually be three databases and schemas -

Bike SA is the peak cycling organisation in South Australia, lobbying Government for cyclist safety improvements and promoting all facets of cycling. Their cause is largely funded through several events held throughout the year, some attracting thousands of entries. In 2004 the decision was made to migrate this snail-mail / paper based system to an online one. Participants would be able to fill out personal details and select options relating to the event, including meals, transport, and associated social activities. Payment through BPAY, phone (credit card)  and cheque could be made in the final stage of registration.

Smartsite partnered with TRIM Systems, and together developed the project scope with Bike SA. The build consisted of a client-facing site, which would be incorporated into BikeSA’s website, and a secure administration back end. The solution had to run on BikeSA’s Windows Server, and Trim performed installation and configuration to support some of the site’s features.  They also managed data migration from Excel / MS Access Database to MySQL. Smartsite worked on the PHP / MySQL powered forms, developed the new database schema, and designed / built the administration back end. Several of the online forms included complex client side validation and logic, which was handled by Javascript.